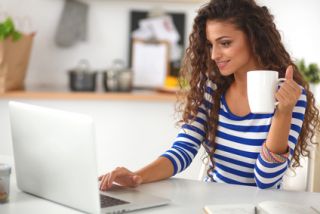 Every day when Facebook asks, “What’s on your mind?” around 400 million people respond with a status message. While some people take the opportunity to share about their latest meal, other people post photos or inspirational messages. Over the past few years, researchers have discovered the way people choose to present themselves on Facebook speaks volumes about their personality and self-esteem.

Examining your behavior on social media could give you insight into your own personality, as well as how others perceive you. You may think you’re presenting yourself in a certain light only to discover other people view your behavior completely different.

Here are seven things our Facebook interactions reveal about people:

2. Extroverts update their status more often than introverts. Just like in real life, extroverts socialize more on social media, according to a 2014 study titled “Personality Traits and Self-Presentation at Facebook.” The study found that extroverts use the like button more often. upload more pictures, and update their status more frequently than introverts.

4. Open people fill out their personal profiles most thoroughly. A 2010 study called, “Social Network Use and Personality,” discovered that open people – described as artistic, imaginative, and creative – use the most features on Facebook and are most likely to complete the personal information sections. They also tend to post more “wall messages” when communicating with specific friends.

5. Narcissists make deeper self-disclosures that contain self-promotional content. Narcissists – people with an inflated self-concept and a strong sense of uniqueness and superiority – seek attention and affirmation on Facebook. A 2014 study published in Computers in Human Behavior found that narcissists posted more frequently about themselves in an attempt to attract likes and comments that fuel their beliefs about self-importance. Other studies have found that narcissistic people love to selfies and they share the ones where they think they look most attractive in hopes of gaining admiration.

6. Neurotic people post mostly photos. A 2014 study titled, “Capturing Personality from Facebook Photos and Photo-Related Activity,” found that highly neurotic people – those most prone to stress and anxiety – seek acceptance by publishing photos. Since neurotic people struggle with communication and social skills, researchers believe they use photos on Facebook as a means to express themselves. Also, photos are less controversial than comments – which could lead to a lot of anxiety as they wait for other people’s responses.

Neurotic people tend to have the most photos per album. Researchers believe this stems from their desire to present themselves positively. They may use photos to try and appear happier and to show they are able to keep up with their friends. Over time, however, the behavior of highly neurotic people tends to change. They’re likely to imitate their friends’ Facebook behavior in an attempt to seek acceptance and decrease feelings of loneliness.

7. Agreeable people are tagged in other people’s photos most often. A 2012 study titled, “Personality and Patters of Facebook Usage,” found that the higher a person ranks in personality scales for agreeableness, the more likely that person will be tagged in Facebook photos posted by other people. Since agreeable people tend to behave warm and friendly and less competitive, it’s not surprising that their friends enjoy taking lighthearted pictures with them and sharing them on Facebook.

Although we may think we’re masking our insecurities or portraying ourselves in the most favorable light, our behavior on social media reveals more than we might think. It’s not just what we post on Facebook that reveals information about our personalities  – it’s also what we don’t post that can be quite telling. It’s likely that our personality profiles will continue to play a major role in how advertisers market to us and how companies will choose to hire people in the future.

Amy Morin is a psychotherapist and the author of 13 Things Mentally Strong People Don’t Do, a bestselling book that is being translated into more than 20 languages. To learn more about her viral article turned book, watch the book trailer below.